Winaday makes a long commute to work fly by! Some of the best games are available to play on my phone. By Judy R.
"I have cashed out at other places but you made the process unbeatable, you kept me informed throughout and all this at no cost to me. My new saying about your casino is “Why play with the rest, when you can play at the best!” Win A Day/Slotland casinos an experience you will never forget." By Cledith A.
Out of all the casinos I have played at, having played for many, many years now, Winaday is by far the best. And has the BEST of everything! The games are top notch and have great payouts. By Jeanne F.
I have been playing Winaday for a long time and you are my favorite. I have basically stopped playing most of my other casinos and WinADay is the ONE. By Carole L.

The Birth of Casino Games

From medieval dice to Old West saloons, humans have always been a betting bunch, and casino games have always been a big part of that. With higher intellect comes an ability to reason and weigh the odds, so it's no surprise that people figured out a way to turn that skill -- once necessary for survival -- into something fun. After all, it's hard to forget the adrenaline rush that comes with taking risks and winning big.

Win A Day Casino members get to tap into their inner thrill-seekers and try their luck at our virtual instant play slots, penny slots, table games, and video poker. Each game is the product of centuries' worth of evolution and progress, and each one appeals to a different kind of player, or at least a certain mood. We want to celebrate the timeless allure of this rewarding hobby by following its journey through history,

According to Encyclopaedia Britannica, gambling is almost as old as mankind itself -- or at least as old as its recorded history. In fact, the world might even have gambling to thank for some of its most fantastic Wonders: in order to repay their gambling debts, ancient Egyptians went to work in stone quarries. Under the hot African sun, they mined the stones, gems, metals, and minerals that would become famous sculptures, elaborate jewelry, and even the building materials for the pyramid themselves.

Our themed no download games help celebrate the planet's longtime betting streak, with animated themes that span centuries of civilization. Pyramid Plunder, one of over 50 virtual slot machine games, offers 25 different paylines etched into stone that could have been mined by those early gamblers themselves. On the left, a ray of light pierces King Tut's Pyramid; even the "spin" button is a blinking ruby embedded in a shiny gold statue. 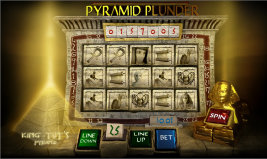 In caves and tombs, archaeologists have identified stone etchings and rudimentary tools that suggest gambling games as far back as the Stone Ages. These artifacts also detail how ancient Chinese and Roman emperors regulated gambling, which was especially prominent in civilizations that were highly superstitious or spiritual. In fact, some anthropologists think that gambling was originally divine in nature, rather than criminal or even recreational. Primitive dice included marked sticks and rocks that were cast into the sand or across a flat surface; men interpreted their fate and the gods' treatment of them from the way these objects landed. Of course, modern gamblers have much greater control over that fate; gradually, with the help of logic, sport, and mathematics, gambling evolved into a series of games with precise stakes, well-defined rules, and even room for practiced skill.

Casino games have a particularly interesting history in the United States; while American gambling only goes as far back as the seventeenth-century colonies, it made up for lost time and eventually turned a remote part of the country's western desert into the gambling capital of the world. According to the California Research Bureau, Las Vegas was preceded by a spirit of opportunism that swept across the early United States. Parlour games in the colonies made way for dice and card challenges in the saloons of the Old West; eventually, buildings were designated for the playing of strategy and risk games.

We're proud to play a role in gambling's most modern chapter yet. With casino games right in our members' homes, they offer brief distractions from everyday routines, or nights to unwind and make blood-pumping decisions. We can't wait to see what's next for the future of these fames.