"I have cashed out at other places but you made the process unbeatable, you kept me informed throughout and all this at no cost to me. My new saying about your casino is “Why play with the rest, when you can play at the best!” Win A Day/Slotland casinos an experience you will never forget." By Cledith A.
A fair, honest, and professional business. There are many players out there searching for the peace of mind and integrity that accompanies a reputable site such as Winaday. I want to thank all employees, top to bottom, for the stellar service provided." By Robert H.
I don't know why I sometimes play at other online casinos as they don't come close to yours. Winaday casino makes it so easy and simple if you ever take advantage of a promotion or bonus. Everything you want in an online casino is at Winaday casino! By James S.
"I enjoy all of your games, it is difficult to to pick ONE favorite! I get bored quickly with other casinos but at Win A Day I just want to keep playing - its what a casino should be! As if that's not enough, the frequent bonuses, contests, tournaments, and other promotions keep me coming back to be a part of all the FUN! Win A Day, thank you!" By Brandy M.

Welcome back for the fourth part of Win A Day Casino's in-depth look at slot games. Today we will look at the history of the video poker experience.

Video poker slot games first became commercially viable when it became cheap enough to combine a television style screen with a number crunching computer chip. The earliest models appeared at the same time as the first personal computers were produced, in the mid-1970s, although they were primitive by today's standards.

Video poker slot games became more firmly established when Draw Poker was introduced in 1979. Throughout the 1980s, video poker became increasingly popular in casinos, as people found the devices less intimidating than playing table games. Today video poker enjoys a prominent place on the gaming floors of many casinos. The game is especially popular with Las Vegas locals, who tend to go to local casinos off the Las Vegas Strip. These local casino games often offer lower denomination machines or better odds, although this was more common in the 1990s as casinos across the country have recently been cutting their pay tables and/or only offering 25-cent machines or higher. 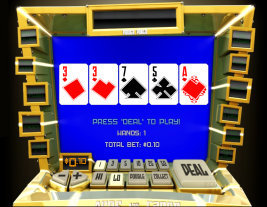 After inserting money into these video poker slot games, play begins by placing a bet of one or more credits and pressing the "deal" button. The player is then given cards and has the opportunity to discard one or more of them in exchange for new ones drawn from the same virtual deck. After the draw, the machine pays out if the hand or hands played match one of the winning combinations, which are posted in the pay table.

There are many variations of video poker slot games. They include Deuces Wild, where a two serves as a wild card, pay schedule modification, where four aces with a five or smaller kicker pays an enhanced amount, and multi-play poker, where the player starts with a base hand, and each additional played hand draws from a different set of cards with the base hand.