"I have cashed out at other places but you made the process unbeatable, you kept me informed throughout and all this at no cost to me. My new saying about your casino is “Why play with the rest, when you can play at the best!” Win A Day/Slotland casinos an experience you will never forget." By Cledith A.
"The games at Win A Day are so different to other casinos, they have so many unique features that really make them stand out! I will return to play here over and over again. When you combine the wonderful games, superior customer support and terrific daily promotions it's a no brainer. Win A Day is a winner for me!" By Laurie K.
I don't know why I sometimes play at other online casinos as they don't come close to yours. Winaday casino makes it so easy and simple if you ever take advantage of a promotion or bonus. Everything you want in an online casino is at Winaday casino! By James S.
Winaday makes a long commute to work fly by! Some of the best games are available to play on my phone. By Judy R.

On History and Development of Slot Machine Games

The history of slot machine games and how they have progressed from the first invention to modern online games is fascinating.

During the late 1800's, there were a few slot machines based on the game of poker. These machines came from the Sittman and Pitt Company in New York. But it wasn't until 1887, when Charles Fey invented the first slot machine, when the devices became popular. The slot machine of Charles Fey had the name of the "Liberty Bell" because the highest prize payout came from getting three Liberty Bells in a row on the center line. These Liberty Bell machines soon could be found in most bars and tobacco shops. At first, the prize payouts were given in drinks or cigars. Then later it became popular for the machines to dispense gum as prizes in order to avoid laws against gambling. In places where gambling was allowed, such as in San Francisco, the use of slot machines flourished. In areas where gambling was legal, the machines paid out coins for prizes.

The Arrival of the Microchip

During the 1980's, advancements in computer technology improved slot machine design. Walt Fraley invented the first video slot machine in 1979. It was the "Fortune Coin". The IGT company bought the patent and expanded the video slot business dramatically. In 1986, IGT introduced the first slot machines connected to a central computer system with progressive payouts. These payouts reached enormous figures because of so many slot machines being connected together. These are the "Megabucks" slot machines and are still very popular today. The natural progression for slot machines continued to expand both with advanced graphical displays, which make the games visually exciting, and connectivity with other machines, allowing larger and larger payouts. 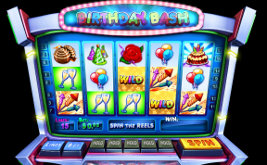 Now it is possible to play slot machines from the convenience of your work or home with online slots real money machines. There are online slot machines starting from one pay line like "Slot-o-Matic" all the way up to 50 pay lines for "Tropical Treat". Our favorite online slot machine is "Birthday Bash". It is frequently selected as the game of the month. The reason why we like it is because when playing it, every day feels like a birthday. It's really a fun party to play it. It has 15 pay lines. Rewards come from lining up cakes, happy birthday cards, balloons, and glasses of champagne. Play is from 10 cents to $7.50 per line. With 5 times play and the fireworks are hit across a full line - the winning is 500 times the amount played per line! Wild cards help and opening the birthday presents make for an exciting bonus round.